For quite a few years I've been photographing Jews at work, at play, at home, and at worship. The project that began in 1993 has led to some interesting insights and to wonderful spiritual discoveries and growth. I've been planning to combine the photographs and my story into a book entitled Teshuvah (hence the title of this blogpost). I'll be using the next series of blogposts to thresh out my thoughts and musings about the subject, and will be posting a selection of photos (old and new) that I plan to use in the book. The posts may be a bit scattered and the photos not to have particular relevance to the subject of the blogpost. But that's just my way of intuitively processing all the information I've been absorbing and trying to organize.

I felt the time was right to do this, as this Saturday and Sunday (August 11th and 12th) are Rosh Chodesh Elul - the beginning of the month of Elul in the Hebrew calendar. Elul is spiritually significant because it is the month of preparation that leads into the Jewish High Holiday season which includes Rosh Hashanah, Yom Kippur, the festival of Sukkot, and Simchat Torah. The meaning of the name of the month will be part of the series of posts, as will the meaning of the word Teshuvah.

Just as a caveat and a disclaimer, much of this material is very deep. The great Rebbes have spent many years exploring and studying the hidden messages of the Torah and Zohar and have devoted their lives to uncovering its secrets.  I'm neither a rabbi nor a scholar, just a thirsty student with a voracious appetite and a deep abiding desire to make sense of my soul and the world around me.

For a starter, consider the Hebrew bible. It's referred to in Hebrew as the TaNaK, which is a shorthand name for the three sections of the book: Torah or Pentateuch - the first five books (Bereishit - Genesis, Shemot - Exodus, Vayikra - Leviticus, Bamidbar - Numbers, and Devarim - Deuteronomy); Nevi'im or Prophets; and K'tuvim or writings. Within the Torah the first four books are the story of the Israelites from creation up to their entrance into part of the land that was initially promised to our forefather, Abraham (the actual promise from G-d included all the territory from the Euphrates River to the Mediterranean Sea, but according to Chassidus that will only happen with the coming of Moshiach). The final book, Devarim, might best be described as Moses' last will and testament. It's the retelling of the story of the first four books in a series of speeches Moses gave to the Israelites just before his passing and the Jews' crossing the Jordan River into what was to become, under the leadership of Joshua and the Judges that followed him, the biblical land of Israel.

The attribution of authorship of the Torah is an issue that has served as the defining point of the three contemporary main divisions in Judaism: 'orthodox', Conservative, and Reform. Until the mid-nineteenth century that attribution was simply to G-d. With the rise of the Haskalah movement (the 'Jewish enlightenment') and of biblical scholarship in the mid 1800's, questions about this have arisen. The Haskalah movement was a reaction of the assimilated Jews of Europe to downplay and 'modernize' the rituals and traditional observances of the very observant ('orthodox') Jews. The observant Jews were further divided into the traditionally observant mitnagdim, centered in Lithuania, and the newly emergent chasidic movement of the early 1700's that developed as a result of the teachings of the Ba'al Shem Tov (Besht) Rabbi Israel ben Eliezer. That division - of the mitnagdim and chasidim - is a story for another time. The Haskalah movement gave rise to what developed, especially in Germany and Austria, to the Reform movement that was carried to the shores of America by the influx of German Jews in the middle 1800's and of Eastern European Jews around the turn of the century. The emergence and rise of the Conservative movement during the first half of the Twentieth Century developed as a result of American Jews who felt that the Reform movement went too far in diluting the thousands of years of traditions and observances, so it sought to move closer to the orthodoxy.

But the dividing point is this: those of the orthodox and chasidic schools of observance believe in the divine authorship of the first four books of the Torah - in other words, they were written by G-d and given to Moses at Sinai. During the forty years between leaving Egypt and entry into Israel, G-d imparted the Oral Torah to Moses which he passed on to the Elders. The speeches that make up the book of Devarim given by Moses to the Israelites in the days leading up to their crossing into Eretz Yisrael were divinely inspired. The reform and conservative Jews reject the concept of that authorship. Rather, they ascribe the writing to a series of mortal men who collected and interpreted stories, myths, and legends about the first approximately 2500 years of history as recorded in the bible.

At issue is that if it was written my mortals and not divine - if man wrote it -man can change it. Truth and morality are no longer absolute.They become a convenience, relative to man's perception. 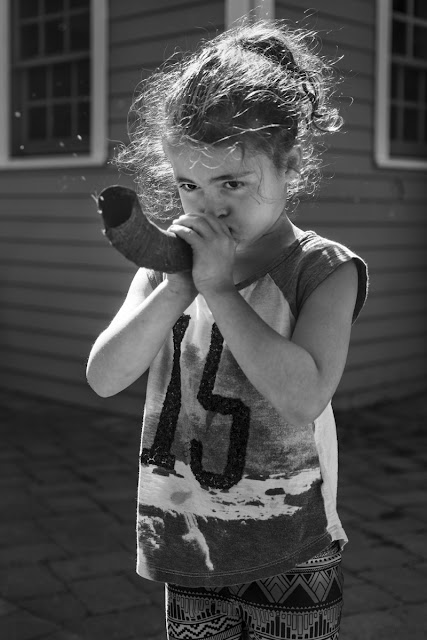 The tallis rack in the basement of the First Roumanian American Congregation: 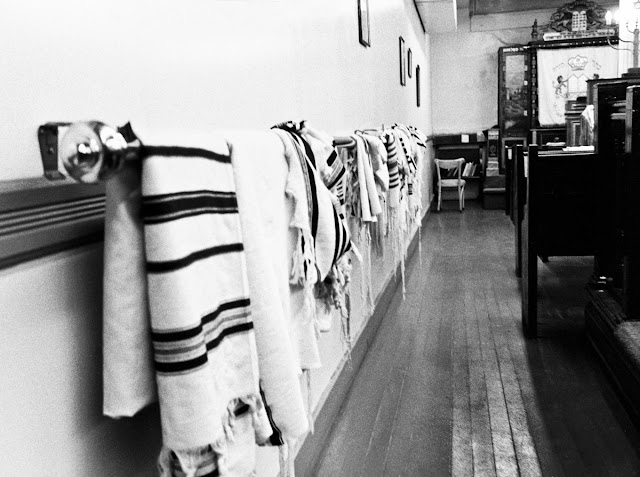 Artwork and book shelf of the shul: 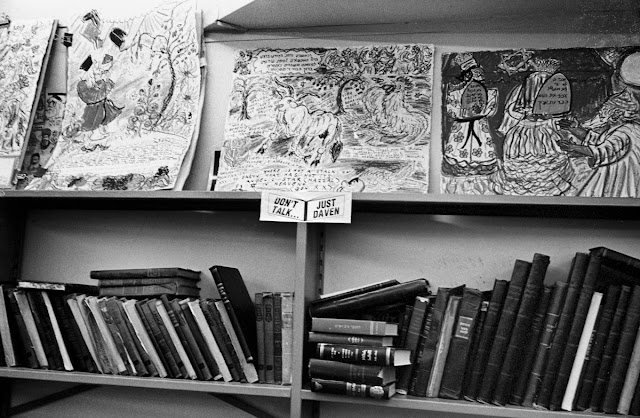 Artist Nathan Hilu showing his work in the shul: 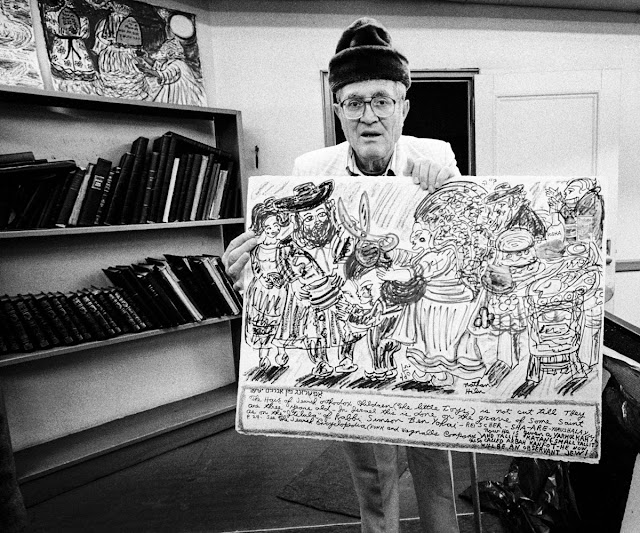 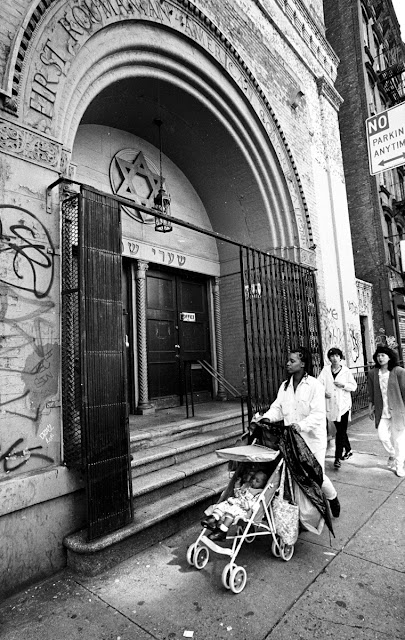 Posted by Fiddlergene at 6:13 PM No comments: